What is olive oil for? 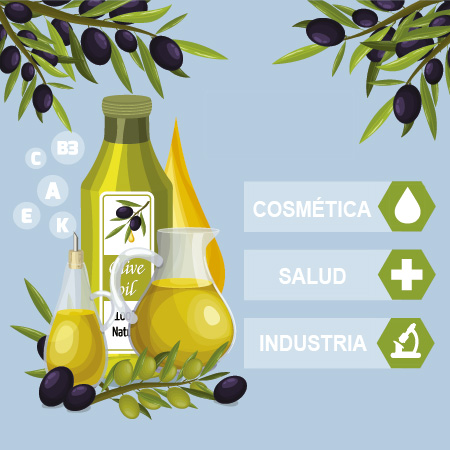 Have you ever wondered what olive oil is for? Well, olive oil has multiple uses in many areas and aspects of life. Some of them are:

Olive oil is a vegetable fat used mainly as food. Provides 9 KCalories per gram. The body uses it primarily as a source of energy and to build the body’s cell membranes.
Typical kitchen applications are:
– Season and season salads and meats.
– As an ingredient in sauces such as mayonnaise, alioli and balsamic vinegar.
– In Mediterranean countries it is used in fried foods: meat, fish, potatoes, aubergines, toast.
– Nowadays, fine dining restaurants serve olive oil on the bread instead of butter at the beginning of the meal.
– Olive oil is usually eaten with toast at breakfast. In some places crushed tomato, garlic, salt or sugar is added.
– Olive oil is used as a preservative. Bacteria and microorganisms found in other nutrients, such as water or milk, do not multiply in the oil. Therefore, it is widely used in the canning industry: canned sardines in oil, canned tuna in oil, canned octopus in oil, etc.
– Mild olive oil is increasingly used in confectionery. Olive oil in candies, cookies and crackers makes them healthier than those with butter.

Olive oil to improve your health

Olive oil has many health benefits:
– Olive oil, along with a balanced diet and a small amount of daily exercise, can reduce the risk of cardiovascular disease.
– Olive oil lowers cholesterol and helps reduce bad cholesterol (LDL) and increases good cholesterol (HDL).
– Extra virgin olive oil with its high content of polyphenols helps prevent the oxidation of triglycerides in the blood and damage to the walls of blood vessels.
– Olive oil can reduce the ratio of omega 6/omega 3, which is currently around 10. Experts suggest that this ratio should be between 5 and 3. This ratio is too high today because the food industry uses a large quantity of oils rich in omega 6 (sunflower oil) in the preparation of their food. Since olive oil is primarily high in omega-9s, replacing sunflower oil with olive oil can help lower this number.
– Olive oil also improves intestinal transit and prevents bad breath.
– Olive oil is often used as a stomach protector.
– Recently, there are studies in which the consumption of olive oil reduces the incidence of certain types of cancer. On the other hand, oleocanthal, a molecule found in olive oil that has anti-inflammatory properties similar to ibuprofen, and studies have been done showing anti-cancer activity in vitro.

– Olive oil has been used to make soap for centuries. There are many creams, gels and soaps made with olive oil.
– In the cosmetic world, olive oil is widely used as a moisturizer for the skin. Among other things, this is due to the presence of squalene. This prevents the formation of wrinkles and keeps the skin young and smooth.
– Olive oil also moisturizes and nourishes your hair. It is usually applied from the roots to the ends of the hair, gently massaged in and covered with a hot towel. It should clear up after five minutes.
– Olive oil for burned skin. After washing and cleaning the burn with fresh water, apply olive oil on the burn. The oil moisturizes the burned skin and reduces the risk of infection.
– Olive oil also helps remove thorns, stingers and splinters from the skin. Apply a little olive oil to the area which can be easily removed with tweezers.

Other uses of olive oil.

– Olive oil is a great homemade lubricant. You can prevent hinges from creaking, as well as use it to lubricate bicycle chains and gears.
– Olive oil also has the effect of temporarily protecting metal parts, preventing oxidation.
– In some specific cases, olive oil has been used as a lubricant in motor vehicles. This is very unusual because olive oil used for these purposes is very expensive.
– In ancient times, olive oil was used as fuel. So, olive oil was used to light oil lamps. Evidently the worst olive oil, called lampante, was used for these purposes. The word lampante is still used to refer to the lowest quality olive oil not fit for human consumption.

Do you want to know more about the world of olive oil, its origins and culture? We invite you to do oil tourism in Jaén, cradle of the olive oil culture.